Welcome to Our Good News Network! This will be a place you can come during the week and get a little pick me up! With all the bad news out there it is hard to imagine what tomorrow will bring. However, Ariel and I are finding fascinating, wonderful acts of humanity exist all around the world! We want to bring these uplifting stories to you. We want to encourage you to step up to the plate and create change in your neighborhood. Or possibly join in a project that is already going.
Thank you for being interested in Our Good News.
We invite you to contact us with your positive story!
- Ariel & Nancy

This is a beautiful story
www.viralnova.com/tutu-cancer-pictures/

Posted by Carousel Dressage at 4:36 PM No comments:

This is what I'm talking about! So wonderful!

http://www.dailygood.org/view.php?sid=264
Posted by Carousel Dressage at 6:15 AM No comments:

People Can be amazing :) 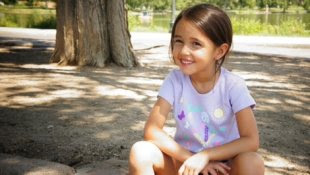 Keira, wearing one of the shirts her dad created for his new company Keira's Kollection. (Photo: Kevin Wagstaf …After reading about a girls' T-Shirt printed with "I'm Too Pretty to Do My Homework so My Brother Has to Do It For Me," Kevin Wagstaff was appalled. But instead of venting to his friends or vowing not to buy the shirt, the single dad decided to do something about it.

"Seeing that shirt kind of was just like, 'Boom! Light bulb moment'," Wagstaff, who has a 6-year-old daughter, told Yahoo! Shine in an interview. "I rolled my eyes and thought, 'This is a problem that's snowballing in the wrong direction'. I thought to myself, 'If someone can approve this, to put this out, they must feel like there's a market for it.' So I'm thinking that I want to create a market that's the inverse of that."

A year later, he's launched his own company, selling T-shirts that encourage, support, and inspire girls to be their best selves. The shirts at Keira's Kollection, which is named after his daughter, are stamped with messages that any parent would be proud to see their child wear. 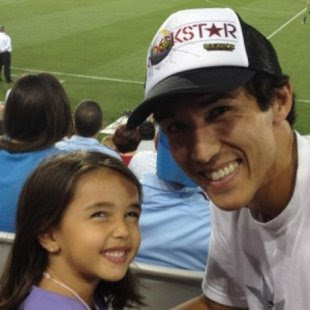 Kevin Wagstaff and his daughter, Keira. (Photo: Kevin Wagstaff/KeirasKollection.com)"Be Confident. Be Different. Be Yourself," one shirt declares. On another, adorned with the flowers and butterflies that little girls love, features 10 key attributes that we all want for our kids. The words -- like "positive," "loving," "healthy," "creative," "adventurous," and "independent" -- form the figure of a pony-tailed girl standing confidently with her hands on her hips. It's the logo for Keira's Kollection.

The Denver-based dad says that he was aiming to create "that positive charge that I think young girls need." And his daughter loves the shirts.

Related: How to help children with low self-esteem

"She loves the one with the flowers and butterflies on it," he says. It's girly and strong at the same time, so girls know that they don't have to choose between pretty and powerful. "There's a proper way to mix these things together," he explains.

The 100-percent cotton shirts are designed by his brother, graphic designer and digital media consultant Michael Wagstaff. They range in price from $12 to $20, and come in sizes and styles for toddlers, girls, and women.

"Girls emulate what their parents do and what older girls do," Kevin Wagstaff points out. "It's been good to see some of my adult female friends embrace the shirts."

He hopes to eventually partner with a charitable organization that helps girls and promotes good self-esteem.

"I do want to make a real-world difference with this," he told Yahoo! Shine. "There's always room for another brand that can do good, that can push against the avalanche of media or bad advertising."
Posted by Carousel Dressage at 9:50 AM No comments:

The Most Inspirational Stories of 2012


Once called "The World's Ugliest Woman," Lizzie Velasquez was born with a medical condition so rare that just two other people in the world are thought to have it. She weighs just 60 pounds and has no adipose tissue, and cannot create muscle, store energy, or gain weight. She inspired women the world over earlier this year when, during an interview with CNN, she said that people "should stop staring and start learning." Since then, she told Yahoo! Shine, she's been flooded with speaking requests and supportive emails. In 2013 she's hoping write her third book (her second, "Be Beautiful, Be You" came out in September), continue her work as a motivational speaker, and meet as many people as possible in 2013.

Yahoo! readers called Velasquez's story one of the most-inspirational pieces they read in 2012 and praised her for her inner beauty and strength

Posted by Carousel Dressage at 5:19 AM No comments:

A good lesson for all to consider.

Wall Photos
The Mayonnaise Jar When things in your life seem almost too much to handle, wh...en 24 hours in a day is not enough, remember the mayonnaise jar and two cups of coffee.A professor stood before his philosophy class and had some items in front of him.When the class began, wordlessly, he picked up a very large and empty mayonnaise jar and fills it with golf balls.He then asked the students if the jar was full. They agreed that it was. The professor then picked up a box of pebbles and poured it into the jar. He shook the jar lightly. The pebbles rolled into the open areas between the golf balls.He then asked the students again if the jar was full. They agreed it was. The professor next picked up a box of sand and poured it into the jar. Of course, the sand filled up everything else. He asked once more if the jar was full. The students responded with a unanimous “YES”. The professor then produced two cups of coffee from under the table and poured the entire contents into the jar, effectively filling the empty space between the sand. The students laughed. “Now,” said the professor, as the laughter subsided, “I want you to recognize that this jar represents your life. The golf balls are the important things - God, family,children, health, friends, and favorite passions. Things, that if everything else was lost and only they remained, your life would still be full. The pebbles are the things that matter like your job, house, and car. The sand is everything else -- the small stuff.” he said.“If you put the sand into the jar first,” he continued, “There is no room for the pebbles or the golf balls. The same goes for life. If you spend all your time and energy on the small stuff, you will never have room for the things that areimportant to you...” he told them.“So... pay attention to the things that are critical to your happiness. Worship with your family. Play with your children. Take your partner out to dinner. Spend time with good friends. There will always be time to clean the house and fix the dripping tap. Take care of the golf balls first -- the things that really matter. Set your priorities. The rest is just sand.”One of the students raised her hand and inquired what the coffee represented. The professor smiled and said, “I'm glad you asked. It just goes to show you that no matter how full your life may seem, there's always room for a couple of cups of coffee with a friend.”
Posted by Carousel Dressage at 8:11 AM No comments:

Dressage and Reining to benefit The Leukemia & Lymphoma Society

Come support Ariel Matisse & Nancy Later with their efforts to raise money for The Leukemia & Lymphoma Society. Enjoy an afternoon of food, horse-back riding demonstrations and much more!

Carousel Dressage
Nancy is a Grand Prix Dressage Trainer and RMT Certified Life Coach. USDF Bronze, Silver and Gold Medalist and 5 star rider. Nancy is passionate about the welfare of horses and the education of Youth Riders. Her message is helpful to any level rider that is trying to find success and fulfillment with horses.